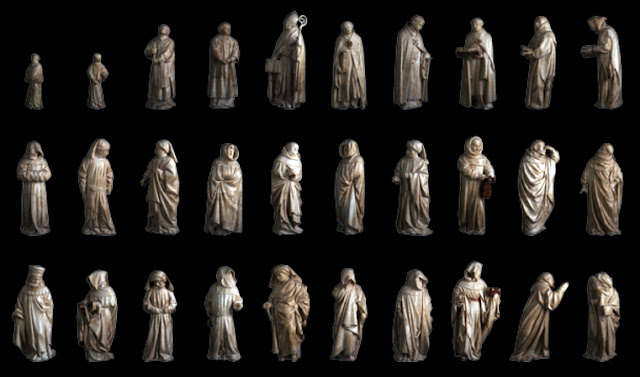 Τhursday, April 7, 2016 - The last two of the Medieval Tomb Sculptures from the Court of Burgundy are to be auctioned June 15, 2016 by Christie’s, during the European Sculpture and Works of Art sale in Paris. During the 14th and 15th centuries, the Valois dukes of Burgundy ruled over extensive territories in present day France, Luxembourg, Belgium, and the Netherlands from their capital in Dijon, which during their reign became a major center of artistic patronage. Larger image Their court's sculpture workshop, presided over by Claus Sluter and his followers, produced some of the most profound and original art of the period. The tombs of the first and second Burgundian dukes, Philip the Bold and John the Fearless, are among the summits of their achievement. The ducal Tombs were conceived for the Charterhouse of Champmol, founded in 1384 by Philippe the Bold as a burial place for the new dynasty of the Valois dukes. The tombs were originally placed in the choir of the church and remained there until the Revolution - see the illustration at left. Larger image Today these tombs are installed in the Musée des Beaux Arts in Dijon, France - see the photograph at right. Each tomb includes in its lower register an elaborate arcade in the flamboyant gothic style, populated by a solemn processional of alabaster figures of monks and clerics that appear to circulate around the tomb as if it were a cloister. Go to the arcades These sculptures, known as the mourners, are small-scale embodiments of late medieval devotion. Though part of a larger monument, each sculpture is a masterpiece in its own right, and each mourner is carefully individualized. While some of the figures are shown wringing their hands or drying their tears, others appear lost in solemn contemplation, while still others hide their faces in the deeply carved folds of their robes.

During the European Sculpture and Works of Art sale, treasures of medieval statuary will be auctioned: the last two figures of Mourners from the tomb of Jean de France (1340-1416), duc de Berry and brother of King Charles V (1338-1380), executed by Jean de Cambrai (known from 1375 to 1438) in Bourges circa 1396-1416. Isabelle d’Amécourt, Head of the European Sculpture and Works of Art department: “In November 2013, two alabaster figures of Mourners from the same tomb sold for over €4M, marking a significant milestone. The sale on 15 June will offer a unique opportunity to acquire the last two marble Mourners from the same collection, and executed by Jean de Cambrai, one of the most important sculptor of his time”. Jean de France was the third son of the French King Jean II le Bon (1319-1364), and considered one of the most prestigious patrons of his time. He set out to rebuild and renovate the castles on his main estates, and commissioned many important works of arts including the celebrated Très Riches Heures du duc de Berry, illuminated by the Limbourg brothers and displayed at the Condé Museum in Chantilly. The Holy Thorn Reliquary and Saint Agnes Cup, valued treasures of the British Museum in London, also came from his collection. Following a tradition established by the French royal family, the duc de Berry commissioned his own tomb and appointed the sculptor Jean de Cambrai (died in 1438), a former collaborator of André Beauneveu (circa 1335-1400), to build it. The grave was to be built in the Sainte-Chapelle of the Ducal Palace at Bourges, and was designed with a life-size recumbent statue lying on a marble slab and a base decorated with a procession of forty mourners sheltered by architectural canopies. Jean de Cambrai executed the recumbent statue and five marble mourners, including ours, before Jean de France died in 1416, and any further construction had to be stopped. His grand-nephew and heir, King Charles VII, entrusted the completion of the mourners’ gallery circa 1450-1453 to Etienne Bobillet (active between 1416 and 1453) and Paul Mosselmann (active between 1441 and 1467). The present marble mourners were carved fully in the round, endowed with expressive faces and with contained postures, accentuated by vertical drapery folds, making them feel very contemporary. The tomb was completed around 1453-59, and for three centuries lay in the center of the choir of the Sainte-Chapelle in Bourges. In 1756 the building was demolished and the duc de Berry’s tomb was moved into the cathedral’s crypt and likely sustained damage at that time. During the French Revolution, the tomb was vandalized: the architectural canopies were hammered, and the mourning figures ended up either destroyed or scattered. Only the black marble slab and the recumbent figure remained unscathed, and are still preserved within the cathedral of Bourges. To this day, twenty nine mourners have been identified. Most of them are kept in some of the most prestigious museums, including the Louvre, the Metropolitan Museum of Art and the Hermitage museum. The mourners that will be offered at auction on 15 June 2016 are the last remaining marbles to be kept in private hands. They have been in the same family since 1807, and are considered a rare artistic display of medieval statuary.