Greek Slave: The acquisition of a historical emblem 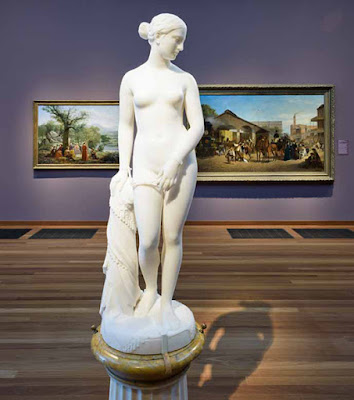 Sunday, April 3, 2016 - The Fine Art Museums of San Francisco have acquired a two-thirds-scale marble version of the American sculptor Hiram Powers’s emblematic masterpiece, "Greek Slave" (circa 1873), one of the most historical and famous sculptures of the 19th century, and it is making a buzz. His inspiration drawned from the renowned Hellenistic marble sculpture of the Venus de’ Medici in Florence’s Uffizi Gallery, Powers created the sculpture in plaster in 1843. Later, his Florence studio carved six full-size and three two-thirds-size marble versions for British and American clients.

The artwork received American and after a while international recognition as Powers’s initial subject is a shackled Greek woman taken captive by Turkish Ottoman forces during the Greek War of Independence (1821–1832) publicly displayed for sale in a slave market in Constantinople. Greek Slave has been one of the first full-length fine-art nude sculptures ever shown publicly in the States, generating enormous controversy and critical acclaim. When the second and third full-size marble replicas toured the US between 1847 and 1851, nearly 100,000 people paid 25 cents each to view the sculpture. Christian churches and ministers opposed strongly that their congregations attend such a repulsive outrage, a handout approached the figure as an exemplar of Christian faith and virtue in the face of great adversity.

In addition, Powers’s theme posed as the Greek struggle to re-establish a democracy in the country that created and inspired it to others had particular resonance in the States as it was perceived they established the first democracy in the New World. Many commentators also explicitly linked the enslaved status of Powers’s white subject to the contemporaneous enslavement of African Americans, in a powerful symbol for the international abolitionist movement in the eve of the American Civil War (1861–1865).