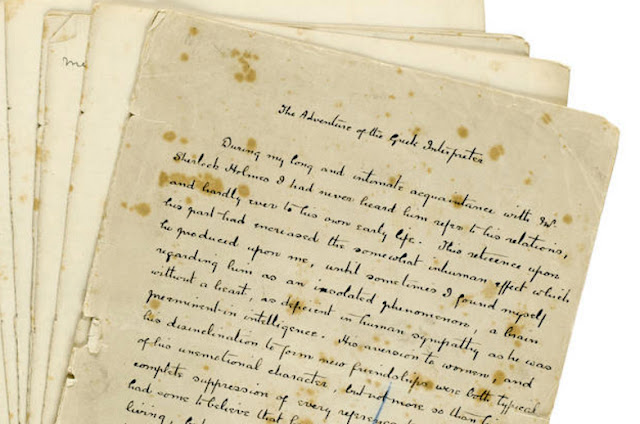 Saturday, March 26, 2016 - A handwritten draft by Sir Arthur Conan Doyle of his 1893 Sherlock Holmes mystery, The Case of Greek Interpreter, is to be sold at Bonhams Fine Literature sale in New York on 11 April. It is estimated at $380,000-420,000. The Case of the Greek Interpreter is best known for the first appearance of Holmes's older brother Mycroft and is among a treasure-trove of Sherlock Holmes' material included in the sale which also features: The handwritten manuscript of The Problem of Thor Bridge – estimate $250,000-350,000 – written in 1922 and one of the last Sherlock Homes mysteries. The story is notable for its reference to Dr Watson's tin box, kept safe on a bank vault and crammed with notes on Holmes's cases. A handwritten page from probably the most famous Sherlock Holmes story, The Hound of the Baskervilles, which marked the return of the detective in 1901/2 after his supposed death at the Reichenbach Falls. As a publicity stunt, individual pages from the original manuscript were distributed to book shops in the United States. Inevitably, many were lost or stolen and the surviving pages are scarce and much prized. This page – from Chapter XIII – is especially valuable because it is one of the few of the remaining sheets that feature Holmes and Watson discussing the case. It is estimated at $100,000-150,000. Page from Chapter XIII of Conan Doyle's The Hound of the Baskervilles, estimated at $100,000-150,000 An article by John Sutherland on the background to the texts is featured in the latest edition of Bonhams Magazine. http://www.bonhams.com/magazine/21317/ The sale also features a reminder of Doyle's other career as a writer of romantic historical novels, in the handwritten 561-page manuscript of Rodney Stone: a Reminiscence of the Ring. Written in 1895, and set in 1851, the work brings together Rodney, sent to London to acquire the ways of a man-about-town, and his childhood friend, aspiring bare knuckle fighter Boy Jim, to solve a murder mystery. The estimate is $80,000-100,000. The sale is particularly rich in late 19th and early 20th century literature and also offers: Chapters 12 - 25 of When the Sleeper Awakes by H G Wells written between 1898 and 1903. It tells the story of a man who falls asleep in 1897 and wakes in 2010 to find himself the richest man in the world and was loosely adapted by Woody Allen for his 1973 comedy Sleeper. It is estimated at $120,000-180,000 Draft and fair copies of Wilkie Collins play The New Magdalen from 1871/2 which was written simultaneously with the novel of the same name. The Magdalen of the title refers to a reformed prostitute and the play was a huge hit, was translated into several languages and ran for 19 consecutive months at the Olympic Theater off Drury Lane where Collins staged equally successful dramatizations of his novels The Moonstone and The Woman in White. The lot carries an estimate of $60,000-80,000.