Tuesday, March 22nd, 2016 - Christie’s announces the launch of a new marquee event in New York, Classic Week, which brings together exhibitions and auctions from Antiquities, Decorative Arts, Old Master Paintings, Sculpture and Classical Japanese Art. Highlighting the week is “Revolution” — the cross-category concept sale on April 13 that presents paintings, drawings, prints and sculptures as physical expressions of changing cultural consciousness. The exhibitions at Christie’s Rockefeller Center Galleries open to the public on April 8, and the auctions will take place April 12 – 15.

April 12: Antiquities. The sale offers works of art from across the ancient Mediterranean world, including ancient Greece, Rome, Egypt and the Near East, which range in date from the Neolithic period through to 1000 A.D. Featuring marbles, gemstones, helmets and reliefs, highlights include an important Roman inlaid bronze Bacchus, an important Egyptian wood figure of a lady, and an exceptional Roman marble of Venus.

April 13: Decorative Arts + European Sculpture and Works of Art. A highly selective offering of the “best of the best” in decorative arts, this sale includes masterpieces of European, American and Chinese furniture, sculpture and objects, all of impeccable provenance and extraordinary quality. Among the extraordinary works offered are a Russian gold tea and coffee-service, a pair of pistols gifted by Marquis de Lafayette to Simón Bolívar, and a rediscovered marble figure of Andromeda. In addition, encompassing sculpture and works of art from the Middle Ages until the end of neo-classicism, circa 1830, the sale offers works in marble, wood, stone, enamel, bronze, terracotta, plaster, stained glass and hardstone, as well as early metalwork and works of art. Highlights include a bronze group of Holy Roman Emperor Leopold I (1640-1705) or Archduke Siegmund Franz Of Austria, a plaster bust of an artist by Joseph Chinard, two marble busts of Roman Emperors, probably Otho and Titus, and a terracotta bust of Milo of Croton by Pierre Puget. See them all HERE. In a separate sale stands “Revolution” -a new multi-departmental concept sale featuring masterworks of fine arts from the 18th and 19th centuries – paintings, drawings, prints and sculptures – that will bring to life the many ways in which the visual arts have documented, illustrated and contributed to the great revolutions – political, philosophical and aesthetic – that made the modern world. The 45-lot sale offers a distinguished and diverse selection of artists such as Boilly, Daumier, David, Géricault, Goya, Ingres, Turner and Vigeé Le Brun. Historical figures represented in the sale include Marie Antoinette, Napoleon, Rousseau, Duke of Orleans and George Washington, among others. 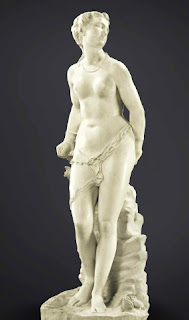 April 14: Old Masters: Part I & II. Encompassing many of the great names of the European artistic tradition from before the Renaissance to the early 19th century, the auction is comprised of many fresh to the market works from private collections. Top lots include El Greco’s The Entombment of Christ, Daddi’s The Madonna and Child Enthroned with Saints, Gandolfi’s The Birth of Venus, and Natoire’s pair of hunting scenes. The sale offers exciting re-discoveries such as works by Allori, Joos van Cleve and Vermeyen, as well as a selection of beautiful view paintings from Venice to Rome. "Old Masters: Part II"  is the continuation of the Part I sale will offer property from the collection of Walter and Nancy Liedtke, and a strong selection of Italian, French, early Netherlandish and Dutch Golden Age works. With more than 150 lots, estimates range from $1,000 to $300,000.