Incubator of Thoughts -An installation recited 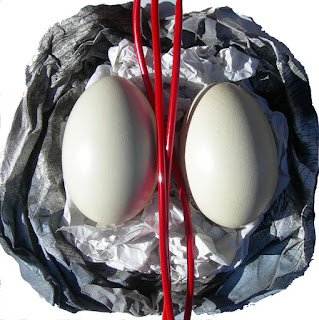 Saturday, February 13th, 2016 - The “Incubator of Thoughts” is a place of meditation and patience. A symbolic landscape that is setting questions upon the codes that define the relation of art with the birth of the idea. Influenced by the mystery of the act of conception of an idea, I set up a space that represents the period of internal crystallization of the idea for an artist. Mental artistic display is a complicated procedure, sometimes hidden from the artist itself. An aesthetic idea, to finally set its image, is formed through experiences and feelings, theories and doubts, in the dark closed inner spaces of the mind. Ancient and universal symbol, the Egg is hiding inside the miraculous seed of life an essential existential enigma. Under its fragile surface is preparing for something new. It is THE BEGINNING. Two eggs, a frail normal pair, are illustrating the harmonic duality of the existence and of the Universe. The contrasting pairs that this concept is trying to express are endless and in balance only through a perfect equilibrium of the whole. The nests are supporting this idea through their shape -the two hemispheres- of the human brain, the logic and the intuition. Everything is washed with a protective light falling upon them through red wires -arteries- that feed them with ''blood'', another symbol with various social and spiritual references.

With its existence in space, through a white stripped atmosphere and a powerful light contrast, the ''Incubator of Thoughts'' is suggesting to the viewer in an indirect way to think about the mystery of creation of art and beyond. The agony, the pain and the wonder that comes with the birth of an artwork are inevitable and their truth remains hidden from the eyes of the viewer.

Christiana Iliopoulou - Hopirtean is setting an installation by the title of  “Incubator of Thoughts” the Vitrina section of Myro Gallery of contemporary art in Thessaloniki, Greece. The installation will be on between March 10th and April 16th, 2016. Myro Gallery of contemporary art is situated in the address 8, Nikiforou Foka Street, nearby Lefkos Pyrgos (The White Tower) Monument, in the centre of Thessaloniki. Opening: Thursday the 10th of March 2016, at 8 PM.