Fotis Klogeris: A dive into the newly born Greek expressionism 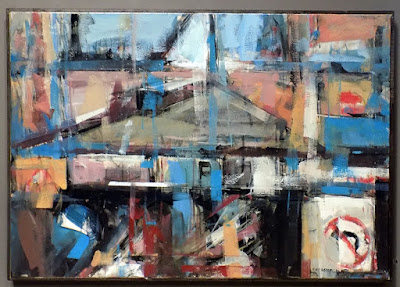 Tuesday, February 16, 2016 - In the younger generation of Greek artists there is a gap of style for expressionism the contemporary way. Though loads of artworks are occupied by expressionist style deformation, most of the times they lack consistency. Only a few Greek artists in the last 40 years managed to remain loyal to their expressionistic form, and they are the ones who really appeal to a wider international audience. Consistency of expressionism without punctual repetition is an aspect of style less elementary than creating a personal identifiable style in Visual Arts. In this manner, the expressionist style I saw when I have first seen Fotis Klogeri's series “Metro in Thessaloniki” struck me positively; the expressionist style is consistent through the series but each artwork is totally discernible from any other, even though the palette of the artist observes the variety of colour. Prominent and established Greek artists such as Kostis Georgiou are showing the road for a Greek expressionism to dominate our small corner of the world, and widen to the international discource of art styles of Now. The birth of descendants of the style can only be the cause for rejoice.

Comparing the artists' style to the international experience of the last decades, Klogeri someone can claim he has nothing new to offer; dozens of significant American and central European artists have contributed to the Urban landscape of visual arts with a similar approach. However, the built of these styles is rare that they come from Mediterranean countries. Nevertheless, in a second reading of the works, something else comes up. From 1400 to 1800, Western art was dominated by Renaissance-inspired academic theories of idealized painting and high art executed by either groups or grand masters. By the Industrial Revolution times, there was a turn towards realism of subject, actually, setting the subject matter outside the “High Art” tradition. The term “Realism” itself was promoted by the French novelist Champfleury during the 1840s, although it began its formal use in 1855, with an Exposition by the French painter Gustave Courbet (1819-77), after one of his paintings (The Painter's Studio) had been rejected by the Universal Exhibition. Courbet set up his own marquee nearby and issued a manifesto to accompany his personal exhibition. It was entitled "Le Realisme". The style of Realist painting spread to all genres instantly. Apart from pure style, realist artists would then be lured into a turn on their subjects: urban working class life, street-life, cafes, night clubs and brothels and a frank eye in the treatment of the body, nudity and sensuality. Realists portrayed real people not idealized types. From now on, artists felt increasingly free to depict real-life situations, reflecting a shift in the significance and function of art. On the other hand, Expressionism as a modernist movement originating in Germany presents the world solely from a subjective perspective, distorting it radically for emotional effect in order to evoke moods or ideas, and express the meaning of emotional experience rather than physical reality. In an urban environment this is done not on the canvas of the artist but within the visual range of each one of its occupants. 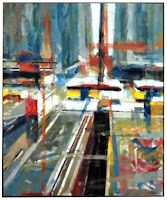 Envisioning the everyday experience on the canvas is one thing, while capturing the emotional effect and the impression of environment itself stripped of the human presence, into the soul of the city stroller/inhabitant I a totally other. Forms deriving from massive construction in the heart of the city are distorted or exaggerated and colors are intensified for emotive or expressive purposes. The lighting of the paintings is also exceptional, mainly because the artist doesn't resolute to the easy solution of creating a dark utopia. On the contrary, the heavy lines defining forms are full of light and vividness, imposing a real life environment to whoever has been strolling around a major Greek city as Thessaloniki, the place depicted in the canvases. As a result, the paintings seem familiar or constant to the actual environment, not excluding, but at least subsidizing the Utopia/Dystopia counterbalancing from the discourse, and enforcing the discussion of the transformation of the city into a massive lab giving birth to highly disputed future, leading the way for a powerful mode of social criticism to take place.