A collectible Italian Renaissance Salvatore Mundi to be auctioned in Greece 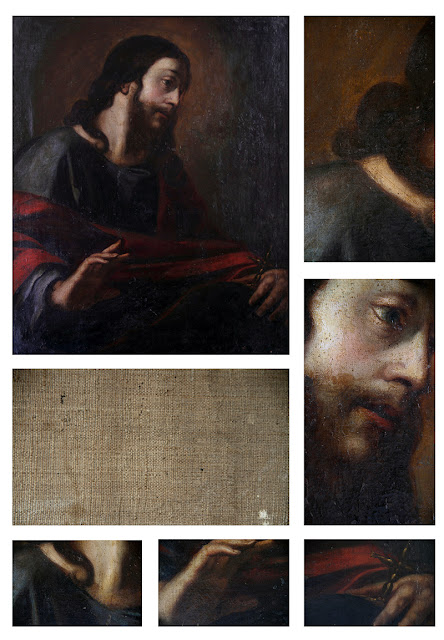 Thursday, February 18th, 2016 - A late Italian Renaissance (17th century) painting of  the favorable for the period theme  "Salvatore Mundi" is falling under the hammer in the auction of the 6th of March 2016 in Myro Antiques House auction house in Souroti, Thessaloniki, Greece. The painting which almost certainly belongs to a student of the Grand  Italian  Master Mattia Pretti, has been appraised by the Old Masters Department of Sotheby's executive Mrs. Sara Milone to a value of 7000 - 10000 euros and assessed for his originality and creation by the renowned American Art Historian John Thomas Spike, who concluded that it is not the work of the Master Mattia Pretti, but it may well be the output of one of his students, and evidently a technically interesting work of the era. View the artwork as registered into the auction HERE.Learn more on the artwork, get the chance to see it closely, and examine it, by contacting the auctioneer Mr. Stavros Muronidis at (0030)6971890212.

Salvator Mundi, Latin for Saviour of the World, is a subject in iconography depicting Christ with his right hand raised in blessing and his left hand holding an orb surmounted by a cross. The latter symbolizes the Earth, and the whole composition has strong eschatological undertones. The theme was made popular by Northern painters such as Jan van Eyck, Hans Memling, and Albrecht Dürer. There are also several versions of the theme attributed to Titian, notably the one in the Hermitage Museum. In later depiction within the same period of time, such as the fine artwork Myro Antiques House is auctioning, Christ is depicted holding a cross in his left hand.

Mattia Preti (24 February 1613 – 3 January 1699) was an Italian Baroque artist who worked in Italy. Born in the small town of Taverna in Calabria, Preti was called Il Cavalier Calabrese (the Calabrian Knight) after he was accepted into the Order of St. John (Knights of Malta) in 1660. One of Preti's masterpieces were a series of large frescoes, ex-votos of the plague (which were painted on seven city gates but have since been lost to the ravages of time). Having been made a Knight of Grace in the Order of St John, he visited the order’s headquarters in Malta in 1659 and spent most of the remainder of his life there. Preti transformed the interior of St. John's Co-Cathedral in Valletta, with a huge series of paintings on the life and martyrdom of St. John the Baptist (1661–1666).