Vandalism | A totally alternative Cheapart Athens is expecting your visit 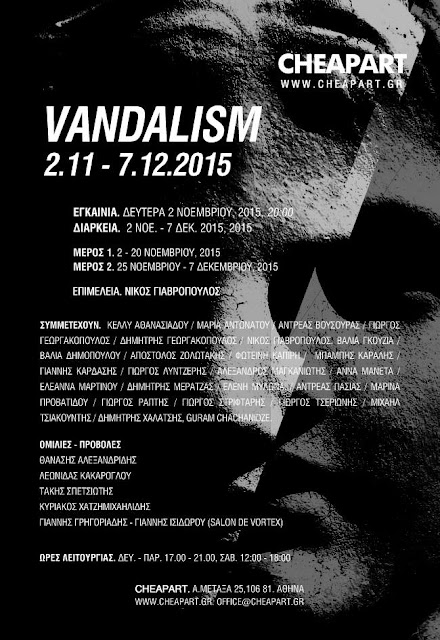 Wednesday, October 14, 2015 - Sophisticated or not - vandalism as it reaches out to values, social behaviors, ideas, symbols; this November, Cheapart Athens and  curator Nikos Giavropoulos makes use of this term as referred to at present; (he has inflicted self-vandalism) to conclude upon the fact that the act of destruction concerns not only the works of art but any destruction of public or private property. The term is yet to be interperated by the beholder of the act itself, whether he be a political or religious leader, or a citizen. N. Giavropoulos speaks of aesthetic vandalism, vandalism of symbols and/or values.

Participating artists of the exhibition are invited to make themselves vandals and create work based on their own interpretation of vandalism. It is interesting to review the extent of the meaning of this term. Every artist may sense vandalism – in his work, within the city, in his/her everyday life, his/her feelings and human interactions. Vandalism during the 21st century has developed, perhaps become more sophisticated, reaching out to values and social behaviors, ideas, symbols.

As Nietzsche says: “Art is the force that resists chaos, not to be carried away by this but to give form, meaning and direction, making life feasible despite the chaotic reality.”