Tuesday October 6, 2015 - Kalfayan Galleries in Athens present the solo exhibition of Greek born, UK based artist Aikaterini Gegisian. As one of the participating artists of this year’s Golden Lion winner Armenian Pavilion at the 56th Venice Biennale, Gegisian showcases part of her Venice body of work, A Small Guide to the Invisible Seas. It comprises seven chapters of collage work (all seen in the homonymous artist’s book available on view), three of which are currently exhibited at the Armenian Pavilion (The Sea of Echoes, The Sea of Actions, The Sea of Waves) with the remaining four featured in the third solo show of the artist at Kalfayan Galleries (The Sea of Reflections, The Sea of Passions, The Sea of Departures, The Sea of Images).

The coinciding exhibitions encapsulate an inter-dialogue between the two cities (Venice-Athens) embracing a conclusion of the entire project. 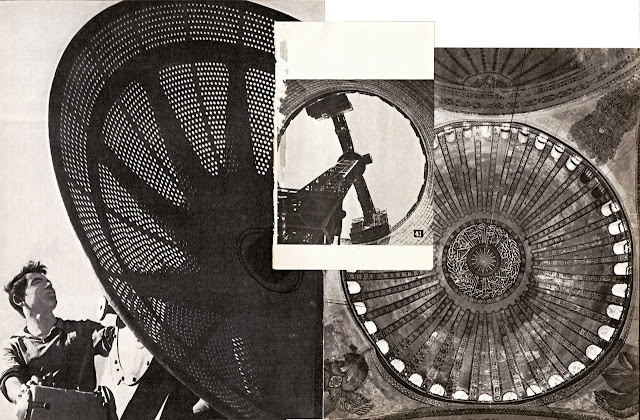 Embarking from her ongoing investigation for notions of heritage, societal stimuli, gender ipseity and cultural identity, Gegisian’s research engages an innumerable volume of found printed material such as photographic albums and tourist guidebooks published between the 1960s and 1980s. The segregation of imagery embodying industrial environs, historical and archaeological sites, religious monuments and idyllic landscapes generates the synthesis and the rebirth of a new narrative. Imbued with autobiographical references regarding the artist’s origins, each of the collages unravels representations of Soviet Armenia, Turkey and Greece. Intermarrying elements of topography across -what at first seems to be- dissimilar geopolitical regions, disparate architectural typologies and ethnological blends, not only seduces the viewer into deciphering the layering of images but also registering the underlying analogy of reciprocal and synchronous trajectories with the surfacing of new topographies. The amalgamation of these diverse geographical loci unfolds through processes of the collective unconscious, pronouncing an heterogeneous cross-cultural discourse.

A series of three smaller chapters initiates the ‘hyperlinking’ of the four Seas. Entitled The Red Line, Sea Blues and A Place in the Sun respectively, this new body of work follows the aesthetics of A Small Guide to the Invisible Seas rendering the method of collage of archival images empowered and activated this time by the presence of an additional superimposed network of lines. Echoing her previous experimentation of deconstructing forms existing in urban habitats, Gegisian now employs simple and single lines to resemble the process of abstraction and the visual lexicon of abstract constructivism. This, in turn, evokes one of the ways of censorship as performed by Glavlit and Goskomizdat, the former Soviet Union's organs for official censorship, which used to monitor any type of printed material up until at least the late 1980s. Over these three chapters the lines become agents in challenging counter-ideological traditions and social infrastructure; they emerge as subliminal axes of noetic deconstruction of spatial awareness.

A projection of 40 slides (Formless Forms) responds to the colour repertoire in the imagery of the utilised 1960s-80s publications. The transitioning of colours throughout the course of the day and its effect on the human vision is also one of Gegisian’s main interests. Visible -natural or manmade- landscapes are gradually sculpted and devoured by the colour of the sun and its light. What initially seems to be clearly visible suddenly appears dissolved, transparent and invisible; a constellation of fragmented shapes, while orientation unceremoniously gives way to the sense of disorientation.

This natural and omnipresent trompe-l'œil encompasses the misconceived perception of discontinuity from antiquity to present lifetime.

About the Artist
Aikaterini Gegisian (b.1976, Thessaloniki) lives and works between the UK and Greece. Her multi-faceted work explores how images operating within a global media environment that shapes the conscious and unconscious contain new possibilities for thought. In 2014 she completed a PhD at the University of Westminster (London) and was a Visiting Scholar-Artist at the University of Pennsylvania (USA). This year she was one of the exhibiting artists at the Armenian Pavilion, 56th Venice Biennale, which received the Golden Lion for best national participation. Her work was presented at recent survey exhibitions including 6th Moscow Biennale (Russia), 3rd Mardin Biennale (Turkey), 2nd Tallin Photomonth (Estonia), 1st Thessaloniki Biennale (Greece) and 6th Gyumri Biennale (Armenia). Her work has also been shown in museums, galleries and film festivals internationally including CAC-LA Travere, Alfortvile, France; NARS Foundation, New York; Peltz Gallery, Birkbeck College, London; Vladikafkaz Fine Arts Museum, North Ossetia, Russia; Centre for Contemporary Art, Thessaloniki, Greece; Spike Island Gallery, Bristol, Oberhausen Film Festival, Germany; Videoformes Festival, France among others. Works of the artist are included in prominent private and museum collections. Gegisian is represented by Kalfayan Galleries, Athens- Thessaloniki.
Email ThisBlogThis!Share to TwitterShare to FacebookShare to Pinterest
Labels: ENGLISH, Εκθέσεις, Τέχνη
Newer Post Older Post Home