London Calling | A Mission Improbable in Kensington this September 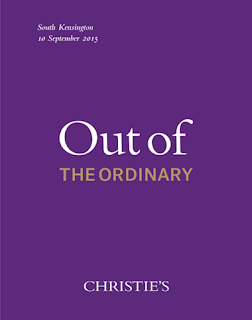 Sunday, August 2, 2015 - On 10 September Christie’s South Kensington will host the third annual Out of the Ordinary auction, celebrating all things extraordinary and unusual. Building on the first two Out of the Ordinary sales, this auction presents collectors with a wealth of unique and fascinating items; from a Tom Cruise ‘Mission: Impossible’ costume, to a crown modelled by Kate Moss on her first magazine photo-shoot, to pieces of sporting history and objects with royal association. Ahead of the sale a free five-week summer exhibition will open to the public on Monday 3 August showcasing the full array of wonders. Everyone is welcome to pop into Christie’s on Old Brompton Road to explore the eclectic selection of rare, curious and out of the ordinary items. A highlight of the auction and exhibition is the C.I.A. Suspension suit worn by Tom Cruise in the 1996 film ‘Mission: Impossible’ (estimate: £5,000-7,000). Cruise, as Ethan Hunt, wore this costume during the iconic scene in which a team of agents successfully break into the CIA's headquarters to steal a copy of the non-official cover (NOC) list to clear Hunt’s name within the Impossible Missions Force (IMF). Also featured in the sale is a felt crown made by leading British milliner Stephen Jones and modelled by the legendary Kate Moss on her first magazine photo-shoot, aged 14 (estimate: £5,000-8,000). The shoot was organised by stylist Claire Hall and photographer Kate Garner, who had spotted Kate Moss amongst the hundreds of model cards at the Storm model agency. Kate Moss was signed to Storm but unknown to the fashion world at the time. The photographs from the shoot were commissioned by i-D magazine for use in their May 1989 issue. This lot is offered for sale together with an unpublished photograph by Kate Garner of Kate Moss wearing the present lot and a copy of i-D magazine, No. 69, May 1989, featuring the photo shoot.

In addition, Dinosaurs will be prowling Christie’s salerooms this summer. A rare and exceptionally well-preserved skull and neck of the Middle Jurassic (circa 165 million years ago) plesiosaur is expected to realise between £60,000 and 90,000. This specimen is the best-preserved skull known of this species, and took over 600 hours to prepare after excavation. Complete plesiosaur skulls are exceedingly rare. This skull contributes significantly to knowledge of the cranial anatomy of the species. Another extraordinary opportunity for dinosaur collectors and enthusiasts is a massive bronzed fiberglass model of a Tyrannosaurus Rex (estimate: £10,000-15,000). This fearsome creature stands at over 2½ meters tall and is more than 7½ meters long.

Further highlights include a polychrome decorated wood ‘Burton’ caravan, circa 1920s and refurbished in 2015 (estimate: £25,000-35,000). This type of caravan is also known as the showman's van and historically was typically used by staff and proprietors of travelling funfairs and circuses in the early 20th century.

A Public Exhibition of the items will be on from Monday 3rd of August until Wednesday 9th of  September 2015 (Monday-Friday, 9.00 am - 5.00 pm, Saturday-Sunday, 11.00 am - 5.00 pm). Please note the House will be closed on Saturday 29, Sunday 30 & Monday 31 August due to Bank Holiday.  A comprehensive catalogue is available online at www.christies.com or via Christie’s Mobile, iPhone, iPad and Android apps.