Performing Your Identity: Representations of the body through social media 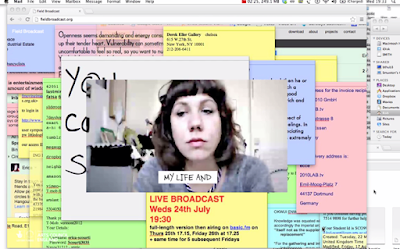 A panel discussion about the fluid potentiality of the virtual in the digital era. We will talk about performing ones identity online, the adaptation of social identities, the expression of the personal in the online sphere, and the re-appropriation of normativity in embodying and performing stereotypes and archetypes. The panel will examine artistic practices that have been exploring embodiment prospectivity either through the creation of multiple, imaginary, virtual identities or through the expression of the personal/political and individual/communal experience using social media.

Artists such as Erica Scourti and Amalia Ulman expose themselves through social media and make a commentary on surveillance, female and body stereotypes. Erica Scourti performs herself with a dose of self-satire and an attitude of ‘serious play’ (Haraway, 1985) whereas Amalia Ulman assumes different identities to perform popular female stereotypes in order to uncover dynamics and power structures. LaTurbo Avedon is an avatar and her practice explores the architectural and social possibility of existing solely virtually.

Georges Jacotey and Natasha Papadopoulou will discuss their work in relationship to the subject: Georges' online performances and his facebook online gallery and Natasha’s video and instagram performances will be discussed extensively among other topics and issues. When one can see the possibility of pixelated self, what happens to the flesh?

Elena Poughia is a young writer and independent curator with an interdisciplinary background based between Athens and Berlin. Particularly interested in sound art, counter-cultural communities, issues of transcendence and feminist cyborg theory. She currently undertakes a pre-doc preparatory seminar at HEAD in Geneva. She edits and publishes a zine called DIALOGOS. which nourishes cross-field collaborations and discussions. She is the sound art curator of a music platform called Phormix and she often curates nomadic, time-based, ephemeral, happenings.
Email ThisBlogThis!Share to TwitterShare to FacebookShare to Pinterest
Labels: ENGLISH, Διαλέξεις/ΔημόσιεςΣυζητήσεις
Newer Post Older Post Home