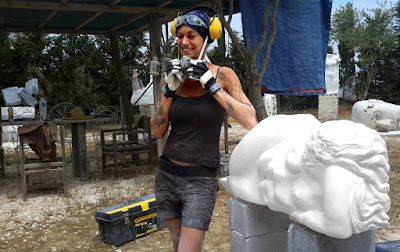 Sunday, June the 7th, 2015 - Jenny Skalkou is the bright, inspiring kind of artist you are pleased to meet anytime; she is the kind person you cannot imagine her being something else and not an artist. Always full of energy, ideas with a profound humour, a philosophy of life tending to surreal and a bright smile, she gained us from the first moment we've met her when she stated her desire to start working with the Greek Marble Initiative at the ends of  the 2014 symposium. She has studied Art in the University of Brighton to be a sculptor, now her main ways with art is sculpture and tattoos, though introduced and experimented with several other media, forms and styles.

- When did you realize you want to be an artist?
Both of my parents and my grandmother are artists, so it was only natural for me and my sister to follow.  There was never really the question of what we were gonna be when we grew up, as we were raised in a household of portfolio sorts and, from very young age, we were always included in family discussions critiquing each others work; even our dog knew to walk carefully around when papers and canvases were on the floor.  As artists, my parents are very diverse from each other, and they are my biggest influences.  I announced when I was 4 years old in my mothers studio that I was gonna be one too.

- What did you want to do in art when you first made up your mind?
It was hard to decide and I really didn't want to.  I wanted to try anything I could get my hands on, didn't want to be boxed in by one particular art form.  I'd always assumed I'd be more of a painter and initially was trained more in that area, but then, when it came down to the wire, I chose to study sculpture in university because it was more open ended in that I would be able to work both 2D and 3D; I prefer multiple media so it was the best decision for me.

- What genres / styles of art you embrace? Do these disciplines intersect at a point in your art, and how do they integrate in the outcome?
As mentioned earlier I choose to try and get my hands in as many different art forms as possible.  They definitely  intersect, because my style  carries through from my paintings, to my tattoos and into my sculptures.  I've done projects in the past that were paintings that turned to 3D overflowing from the picture frame, but I feel that now I like keeping the mediums separate though  constantly being worked parallel to each other. 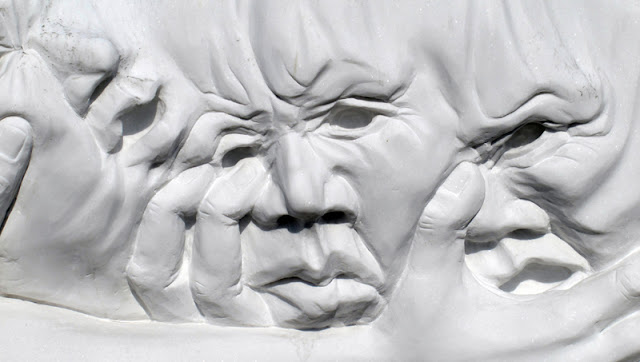 - Is tattoo an art genre? If so, what are its main features that make it stand out from other genres?
I'd put it as a medium rather than a genre; whatever can be put on canvas, can be put on skin and many many different styles and techniques exist. In addition, different tattooists have very clear specific styles just like any other kind of artist, the difference mainly is in the interaction with the client.  It's a totally different thing to tattoo someone, than making them a painting or a sculpture.  However, in terms of a medium, ink and skin is just the same as paint and canvas or charcoal on paper.

- Do people perceive a work of art bore on them, or just a strong statement?
It depends... Every person is different.  Some just want to make a visible statement, others want a piece of personalized art on them, just for them, while others just for show or as a reminder of something they 've been through/enjoyed/struggled/survived.

- How often the ones who come to you for tattoo, ask for a design of yours, or leave you free to decide?
Most of my clients are for custom pieces, big work like sleeves and back pieces, and those designs mainly are developed after a consultation when we decide the best way to execute what the person wants in the best way to sit properly in the area that they want it.  Some people are very open and  let me do more or less whatever I want under a certain theme. Others have it all planned to a tee and won't budge on any aspect of the design, even if the aesthetics are not the best 'cause that's just the way they want it.

- Can you share some small secrets which make the difference by means of quality in tattoos? What should someone look for to decide which tattoo artist to pick?
Choose your tattooist carefully, always ask to see a portfolio.  It's best to see what the work looks like healed,which is why a lot of times one person will come in for a piece and then they bring us their friends. It's different to see it up close than just from a photo.  People choose tattooists just the way they choose artists for commissions: different tattooists have different styles and themes they enjoy inking.  the quality of the tattoo will correspond with the level of the tattooist... Beware of low budget ink, it may come out more expensive in the end if its done poorly and needs to be retouched or covered by another tattooist.

- Last summer you made up your mind to focus on marble sculpture, a quite 'rough' decision, if we consider other media you used so far. So what's the difference as a means of expression?
I have been interested in marble since I was in my studies, but I couldn't find a way to follow that path and  continue to work to support myself.  So when the chance came up to be here I could not believe I was given such an amazing opportunity.  I did woodcarving in the past and the change to stone felt very natural from the start.

- What are the main concepts / contexts your art discusses/falls into?
I like to work with a slightly exaggerated version of reality, whether its an expression that goes a bit over the top, or a certain position of the body that is over extended just enough to be impossible but still look almost natural and extremely expressive.  In the past I worked a lot with 'the moment right before something happens, but lately I'm more into action and reaction just because of the slightly chaotic and extreme motions you can get from it.  Political undertones are impossible not to come out as we are affected every day by our environment, but my emphasis is more on the motion of the body and the face as a reaction to provocation.

- What's the story/concept behind the distorted faces series you 've been working on for some time?
Mainly it was an experiment in expressionism.  I wanted to see how elastic I could make the stone look, and by using almost silly caricature-like faces, I had a touch of more space on exaggeration and distortion.  Also, it seemed really funny to me and I like to keep my work light, I want people to look at them and giggle I think tha's the most positive feedback I could get from any audience.

- Apart from the obvious, which other stages than the actual  sculpting of the stone does the creation of a sculpture involves? How do you "study" your subject and what kind of preparation does it require?
I tend to photograph and then sketch models in many positions that fit in with what I want to do with the sculpture and when I have the stone in front of me and start working I use bits &  pieces of different positions to go with the flow of what the marble wants to do.  I keep it a bit open ended so I don't block myself in if something else really cool starts to happen by accident, instead of forcing the finished product so far I 've seen that a happy accident can be expanded into a wicked final outcome, just have to keep searching for forms that seem to almost emerge on their own and then build on them.

- And what about the "fat ladies" project?
I think I need to make my humor a bit more blatant.  The past series could be read either comically or almost in a dark way (though that was not my intention) -I want this to be cut and dry humorous.  Taking something like a mermaid 'siren' which going back to ancient mythology was always been seen as the ultimate sex symbol and making her so obese she probably can't even swim with her little puny fin is hilarious to me.  Also, I get to play with the rolls of flesh, and for me making something like this is so much more fun! I love the process of carving out the wrinkles and rolls and making her look soft and smashy even though shes made out of marble.  I'm planning on making 2 more so they can be seen either as one piece or 3 separate ones.

- Do you think there are things to be gained by your contact with other artists? Is Greek Marble Initiative the first symposium you are taking part? Do you consider doing more symposiums in the future?
This is my first symposium and its such a wicked experience I'd  definitely be interested in going to others in the future.  of course, contact with other artists is the most important thing I believe, with so many fantastic sculptors around I can't stop asking questions and watching them work.  In any profession I believe one of the most important ways to move forward is to learn from others around you.  Whenever I work a guest spot tattooing, its always an eye opener cause I get to ink along side people who function differently from myself we all give and take and we learn so much from interacting with others.

- Do you think the role of sculpture in public places is important? What you think should be done to improve public aesthetics and arts awareness, and how sculpture can contribute to it?
In Greece we all grow up surrounded by what the ancients left behind. We can't take a walk in town without seeing monuments, temples, and I think that’s whats so wonderful about living in a country like this.  Public sculptures have always been important and I believe that they always will be, people appreciate art in their community and want to have it in their everyday lives.  We shouldn’t just rely on what the ancients left behind, its an example how we should continue ahead and keep up the tradition of public monuments/sculptures.

- What would be your advice to a teenager who would tell you he/she wants to be a sculptor?
Become an art-nerd.  Dive right in head first and try every material you can. I've never worked as hard in my life as I did in art school and I think that its the best thing I ever did for myself. Those years of experimentation played a massive role in making me into the artist I am today.