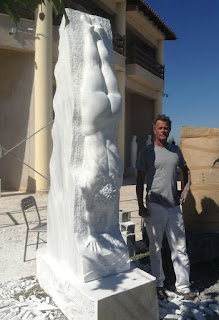 Monday, June 22nd, 2015 - In 2013 amidst the first symposium Greek Marble Initiative ever organized, we have sent out an international "Open Call for Entries", introducing our ideas and effort to the world. To our astonishment we received more than 150 proposals and requests for further information within the first three days after we have issued the Call. It took us about a week to review them all. One of the proposals that wouldn't leave our minds was this of Edward Fleming. His robust realistic yet powerfull figures, the crisp outcome and the qualities of his works became an object of discussion for some days before we arranged a teleconference to discuss with him. Our little inquiry before the phone call revealed a mid-career renowned sculptor, which we felt we somewhat small and "young" as a Symposium to support. The first 5' or our contact eliminated any doubt; Edward Fleming spoke of Greece, marble and sculpture in words of deep love and respect, we very seldom have heard even from Greeks! Now, two years later Edward Fleming has honored us with his friendship, his association to the Initiative, his participation in everything we do, and his presence every little while, which adds great value through his comments and advice to our work, and the work of the other sculptors participating in our Symposiums.

Moving a few years in the past, 1993 constitutes a turning point for his professional career since he starts being occupied exclusively with the art of sculpture. From 2000 till today he has presented his works in plenty of group exhibitions, while in 2005, Justin Roberts Galleries, Santa Fe, NM hosted a solo exhibition of the artist. Since 2010 he started taking part actively in sculpture symposiums outside the USA, creating works of monumental dimensions. He has been awarded six times for his work while he is a member of the National Sculpture Society, the National Sculptor’s Guild, the New Mexico Sculptor’s Guild, Galisteo Art Association, the Southwest Stone Carving Association, The Stone Foundation and the Aegean Stone Sculpture Academy (founding member). At the same time, since 2007 he has been teaching and organizing sculpture in private art workshops.

So today we are presenting you with a great artist and a greater person who, has created ties not only with us, but also with Greece, where he acquired property, and the little village of Agios Andonios found nearby Greek Marble Initiative premises, where he will be married this July.A magnificent sculptor, a bright personality and a good friend.

- When did you realize you want to be an artist? Was it sculpture from the beginning, or your served in some other genre of art first?
When I was in college and yes, sculpture captured my heart from the beginning, although not stone at that time. However, after undergraduate school I studied Architecture, started my own business and practiced for about 25 years. During this time, in 1993, I returned to sculpture and stone carving, my passion for which ultimately led me to leave Architecture in 2001 to make sculpture full-time.

- What are the main concepts / contexts your art discusses/falls into?
The human figure, form and stories. I direct-carve realistic human figurative sculpture in the traditional manner, but tell contemporary stories using the human figure as metaphor and subject.

- Apart from the obvious, which other stages than the actual sculpting of the stone does the creation of a sculpture involves? How do you "study" your subject and what kind of preparation does it require?
Very often an image will literally float up behind my eyelids and I see the sculpture in a moment. Then I draw and often model the idea in clay, refining the composition. A deep study of the person(s) that are the sculpture's subject is necessary from the general anatomy to the fine details of face, hands, etc. Then I prepare more detailed drawings that consider size of carving block, scale, proportions and dimensions. Once all this is completed I begin carving the sculpture.

- Do you think there are things to be gained by your contact with other artists? Is Greek Marble Initiative the first symposium you are taking part? Do you consider doing more symposiums in the future?
Absolutely. Some of my greatest inspiration has come from other artists from other cultures with completely different points of reference and stories. I began attending symposia in 2010 and intend to continue as long as I'm fortunate enough to be on this planet.

- How familiar are the people of your country with sculpture? Do they welcome the contemporary forms of sculpture? What is the degree that the tradition of your country influences your work?
Very familiar, however in general, most Americans are uncomfortable with nude figurative art. So public art tends to be "safe" as opposed to thought-productive. Private collections, Galleries and Museums can be much more interesting and some are highly sophisticated and truly inspired. The USA is very large so different regions are more supportive than others of contemporary sculpture and the artists who create it. Typically, the larger, more cosmopolitan cities embrace contemporary, really creative sculpture: Boston; New York; Chicago; Los Angeles; New Orleans and although only a small town, Santa Fe, New Mexico. The traditions of my very young country do not influence my work at all.

- It is generally believed that contemporary art and figurative/ representational sculpture do not go along very well. What would be your answer to this criticism?
Unless you're talking about fundamentalist Islam then I disagree. I think that schism held forth in the West in the late 20th century, but in this new millennium I see these two aspects being both complimentary and often combined, creating a hybrid art form that's not limited to categorizing.

- Do you think the role of sculpture in public places is important? What you think should be done to improve public aesthetics and arts awareness, and how sculpture can contribute to it?
Definitely very important if we are going to advance as a civilization. Unfortunately, most public art tends to be either safe or derivative, doing nothing to encourage or inspire people to think, to question "reality" and dream. For example, in America there is a virus of perpetually happy, shiny bronze children growing like a fungus, everywhere. This is "cute", "safe" art that any municipal art selection committee can agree on. So, many public artists make their living this way, perpetuating this insipid insult to Art.
One solution to the problem is to educate the public about what art can do to inspire. And there are many ways to do this affordably and effectively, video being perhaps the most influential.
Showing the process of creating sculpture is, in my experience, one of the most powerful ways to inspire average people about public art. The Greek Marble Initiative is an excellent example of this kind of inspiration.

- What would be your advice to a teenager who would tell you he/she wants to be a sculptor?
The world needs more sculptors.
Avoid art school like any other deadly disease.
Travel far and wide and pay close attention to everything you see.
Read everything you can find about every different kind of art,throughout history.
Live and work in a foreign country for at least a year.
Apprentice with master artists who are creating work you admire. Learn from them by watching and listening carefully.
Learn about both the making and the business of art.
Then make your own art that comes from a balance between your intellect and your heart.