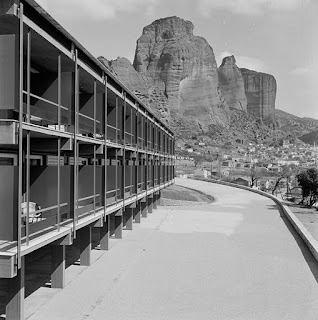 DEADLINE EXTENSION TO JULY 31 2015
- The exhibition of submitted proposals will take place in September 2015.

The aim of this international call is the commoning of a derelict tourist unit. By commoning we mean the site to be freely accessible and neither part of the private/public property of the State nor another private investment portfolio. The site uses are to be determined through an anti-hierarchical and extra-institutional process, on the basis of equal participation, horizontal decision-making and negation of ownership claims, without any distinction as to race, color, origin, sexual identity or religion. To this end, the participation of people with racist, nationalist, xenophobic, homophobic or fascist ideas, attitudes and practices is not possible.

Xenia Motel is a derelict tourist unit, comprised by 7 one-storey buildings with an inner courtyard [315,592 M2 total coverage / 4,543 M2 built coverage] located in Karteros, near Heraklion, the capital city of the island of Crete, Greece. The unit was constructed in 1963 under the national tourism program of XENIA hotels [1950-1974]. Following the implementation of the Marshall Plan [1948-1952], tourism became a key priority of the Greek state in its national restructuring efforts to mitigate the class conflicts by the end of the second world war and the civil war [1946-1949]. It was in 1960 that the first five-year tourism development program started. This program’s basic principles were—in addition to highlighting the historical monuments—landscape promotion and the development of marine tourism, targeting not only the upper class but also the new middle class.

REQUIREMENTS
Proposals may relate to a part or the whole of Xenia Motel and to uses such as infrastructure, equipment etc. Applicability should be taken into account, and in this particular case, how applicability relates to:
• Low or no intervention on the building structure. Reversible constructions are preferred.
• Low or no use of industrial building materials. Ecological materials are preferred.
• Low or no need for specialized construction skills.

SUBMISSION / SELECTION
This is not a typical competition. Proposals are not intended to be mutually antagonistic but complementary. This is for both the phases of synthesis and selection.

During the phase of synthesis, participants are encouraged to post their material on xeniamotel.espivblogs.net. Posts will be visible only among the participants. The general assembly at Xenia Motel will discuss, evaluate and plan how to implement the proposals with the — supportive/consultative and not decisive — assistance from an international design team.

Participants may submit via mail up to 3 boards, A2 or A1 [international paper size]. The design of each board is free as long as it is non-bendable. Models may also be sent to accompany the boards. No personal information should appear on the boards. Personal information [CV is optional] should be included in a closed envelope that will be sent along with the proposal.

Proposals should be submitted both electronically and via mail. For the ARCHITECTURAL PLANS of Xenia Motel, a MAILING ADDRESS to submit your material, and ACCESS TO POST on the website, please send a request to xeniamotel@espiv.net.

All the submitted project proposals will be exhibited as such. Actual installation and/or exhibition of the proposals will depend on their applicability, the possibility of physical presence of the artists or portability of the projects. Suggested projects can be either projects that already exist or project concepts that have not been realized yet. All kinds of art are accepted [painting, sculpture, video, photography, performance, installations, music, theater, digital arts, community work, lectures, other]. General targeting:
• The emergence of sociopolitical issues through symbolic narratives in real or fictional space, based on the given information of the call.
• Experimenting with new forms of political and artistic expression either on the given site or to other that the artist considers relevant
• Promoting political interaction between people either on real or virtual grounds.
• Re-activation of the abandoned the proposed space for a socialization through artistic projects.
• Alternative highlighting of the issue of commoning [guerilla / street art, brandalism etc.] on the given or the surrounding are of Xenia Motel.

Konstantinidis merged in his work internationalist modernistic principles with an element of “greekness”—expressed for him in the “timeless primary forms of anonymous architecture”. XENIA units, for which Aris Konstantinidis was responsible as the principal of the Research Department of Greek National Tourism Organization [1957-1967], share the same patterns:
• Morphology: Adaptation from typologies of temporary buildings/shelters and housing arising from the stressing needs of internal migrants from the countryside to the cities, especially with the end of the Civil War—spaces made without any professional architectural assistance, only by the people who used them or/and resided there.
• Construction: Design concerns a wide range of issues, from how buildings immerse into the landscape to the details of the operating equipment. The load bearing structure is from reinforced concrete. The walls are usually left unplastered. Filling walls are coated by brick, and in some cases stone masonry is used [as in the case of this Motel Xenia], with local mortar or stone cladding.
• Color: Polygnoteia color palette [dark red, ocher, white, black].
• Function: Operating and construction grid overlap, public and private functions are distinguished, movement paths are organized. The XENIA units targeted not only international and domestic tourists, but also, people driving by and the local community. In other words, the XENIA units were designed as meeting places for the residents and the guests of a region.

Xenia Motel has been transferred to the Hellenic Republic Asset Development Fund (HRADF), a societe anonyme incorporated under Law 3986/2011 (GG A’ 152/01.07.2011). It is scheduled to be privatized and be given the land use “tourism & recreation, including tourism villages catering for summer homes” [HRADF Report 01/04/2014–30/06/2014]. To this date, even with the change of government, there has been no cancellation, update or new plan announced for the HRADF investment framework. This particular privatization partly promotes a well known in Crete intensive tourism development model developed through the period of Junta in the 1070s. What differs today is the fact that due to the context of the Privatization Program under the “Medium-Term Fiscal Strategy Framework 2012-2015” (Law 3985/2011; GG A’ 151/01.07.2011):
• All assets [shares; intangible rights, rights of property, management, use, operation and/or maintenance; and real estate assets] owned by public real estate companies, infrastructure and state corporate monopolies are to be privatised by summary proceedings through the Hellenic Republic Asset Development Fund (HRADF). The return of any asset back to the state is not allowed.
• HRADF is entitled to dispose of the assets under its management in any suitable way and in particular by: sale; transfer, property or similar rights or other in rem rights; lease; assignment of the use, operation or management; contribution of the assets in a societe anonyme and sale of its shares; and securitization of business or other receivables. All non marketable assets transferred to the HRADF are to be monetized, through bundling with other listed/marketable assets or restructured and liquidated.
• Profit generated from the HRADF privatization process goes to a special account in the National Bank of Greece solely for the repayment of state debt.
• A new spatial policy particularly for the private properties of the state has been created, the Special Spatial Development Plans of Public Property, of Law 3986/2011. The implementation of this framework is carried out upon the investor’s request. The allowed land uses for such properties, set to suit the business needs of the potential developers, are: a) tourism & recreation including tourism villages catering for summer homes, b) business parks, c) thematic parks, shopping centers & recreation, d) transport, technical, social & environmental infrastructure and e) mixed uses. Such plans deal with the direct planning of activities and are issued following, inter alia, a Strategic Environmental Assessment. Outline planning consent is provided in the form of a presidential decree approving (in scale of 1:5.000) land uses, the special categories of projects and activities to be built, building coefficients and special restrictions that may be necessary and the environmental terms of the plan, whereas the actual environmental terms of the project follow in the form of a ministerial decision which is issued following and on the basis of the outline planning consent. Such Special Plans may amend existing land or urban planning rules, if such an amendment is necessary for the integrated and efficient development of the properties, especially in case of outdated plans. There are special restrictions in the case of environmental sensitive areas.