London Calling | Magnificent Obsessions, and other shows you shouldn't miss 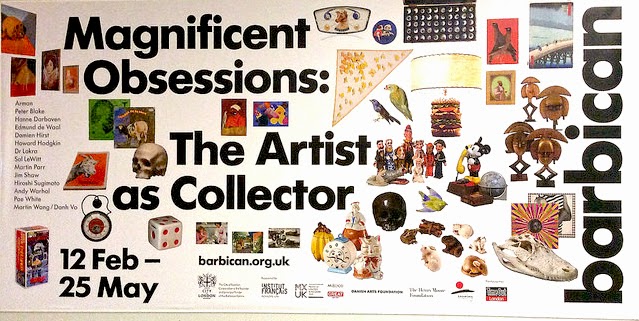 Monday, April 13, 2015 - This is the first major exhibition in the UK to present the fascinating personal collections of post-war and contemporary artists. It is accomodated at the  Barbican Art Gallery Level 3 (Barbican Centre, Silk Street London EC2Y 8DS 020 7638 8891, www.barbican.org.uk). The shhow lasts till May 25th. Ranging from mass-produced memorabilia and popular collectibles to one-of-a-kind curiosities, rare artefacts and specimens, these collections provide insight into the inspirations, influences, motives and obsessions of artists.  While some artists are connoisseurs, others accumulate hoards of objects, never letting anything go. Many live with and make direct use of their collections and others keep them under wraps or in storage. Collecting objects for research and study is key to the practice of many artists in the exhibition. Presented alongside examples of their work, their collections, in turn, help to elucidate their art.  Featured artists:  Arman, Peter Blake, Hanne Darboven, Edmund de Waal, Damien Hirst, Howard Hodgkin,  Dr Lakra, Sol LeWitt, Martin Parr, Jim Shaw, Hiroshi Sugimoto, Andy Warhol, Pae White, Martin Wong/Danh Vo. In addition to the main exhibition, there is a series of fascinating events; exhibition Tour with Chris Dyvik and Max Kahlen 7pm 16 April 2015, in Conversation with Edmund de Waal and Andrew Graham-Dixon 7pm 22 April 2015 Cinema 1 (sporting the acclaimed potter, writer and Magnificent Obsessions artist, Edmund de Waal, in conversation with broadcaster and journalist Andrew Graham-Dixon), and. last but not least, exhibition Tour with Viktor Wynd on 7 May 2015, as the proprietor of The Viktor Wynd Museum of Curiosities, as he leads you round the exhibition sharing insights into the fabulous world of collecting.

Another show which fall into the same category is "Listening", bringing a group of international artists together to interrogate the act of listening in contemporary art. This pioneering exhibition examines the crossover between the visual and the sonic and their complex relationships to the senses. Sam Belinfante, winner of the Hayward Touring Curatorial Open 2014,  has selected new and existing work, including drawings, sculpture, prints and video, and works in the exhibition range dramatically in duration from less than a second to six hours. Visitors can hear a clap of thunder that has been stretched in duration and aurally dissected, recreated by musicians and morphed back into a thunderclap; eavesdrop on a cabin in a forest and listen to the almost inaudible sound of a dying star.  Artists include: Laurie Anderson, Ed Atkins, Janet Cardiff and George Bures Miller, Mikhail Karikis, Ragnar Kjartansson, Lina Lapelyte, Christian Marclay, Haroon Mirza, Max Neuhaus, Katie Paterson, Amalia Pica, Laure Prouvost, Hannah Rickards, Prem Sahib, Anri Sala, Imogen Stidworthy and Carey Young. Find out more HERE.

Last but not least, you should pay a visit to the Paintings and prints by the noted British abstract artist Gillian Ayres, at the Alan Cristea Gallery until 30 May. Find out more at the gallery's website, HERE.