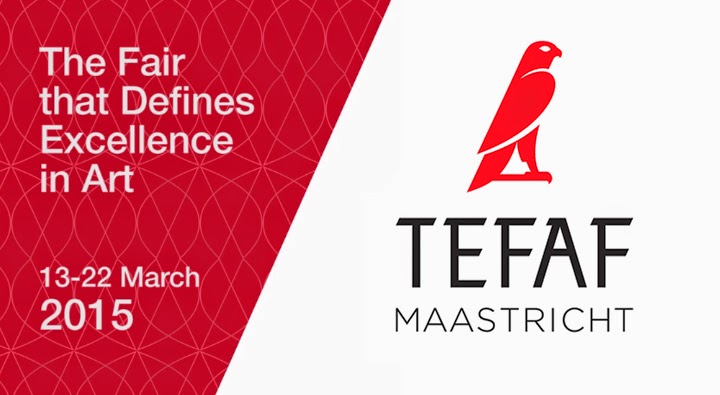 This year the fair will undertake a new initiative in the form of a guest-curated contemporary exhibition. "Night Fishing" curated by Sydney Picasso and Hidde van Seggelen, will present a show of post-modern and contemporary sculpture designed to complement the TEFAF Modern section and will include artists such as Georg Baselitz, Tony Cragg and Richard Deacon. The exhibition will offer a view of the contemporary sculptural landscape, which has a direct classical, cultural, historical and visual dialogue with artists and art disciplines already present at TEFAF.

A strong statement with a British accent
An exceptional presence this year will be the Weiss Gallery, London is bringing a remarkable collection of nine works by Frans Pourbus the Younger (1569-1622), the most captivating of which is possibly Portrait of a Man, at the age of fifty-six. This portrait, which is regarded as one of the best works from the artist’s early period has recently come back onto the market having been in the same private collection for over fifty years. Dickinson, London will show Lailla by Kees van Dongen (1877-1968). Painted in 1908 at the end of the Fauve period, it was executed during a highly fruitful period in Kees van Dongen's career in which he cemented his reputation as one of the finest avant-garde painters in Paris. Staying in the 20th century, Thomas Gibson Fine Art, London will bring Laurette au châle vert by Henri Matisse (1869-1954) which has come directly from the estate of the artist. His mastery of the expressive language of colour and drawing, displayed in a body of work spanning over a half-century, won him recognition as a leading figure in modern art.

Other notable contribution
On the other hand, Moretti, of Florence, London and New York will show The Madonna and Child with a Goldfinch by Studio of Alessandro Filipepi, called Sandro Botticelli. Originally attributed to Botticelli himself and thought to have been painted in the 1480s, in the 1930s opinion changed and it is now believed to have been created by a painter in Botticelli’s workshop at the beginning of the sixteenth century. It has been exhibited in the Metropolitan Museum of Art. Les Enluminures, Albrecht Dürer, Prayer Book (1507-1512) - Patrick Derom Gallery, Salvador Dalí, Mae West Lips Sofa (1936-1970).

Paper
The TEFAF Paper section was inaugurated five years ago and has become known for the strength of its offering. On the stand of Crouch Rare Books, London will be all 12 volumes of Le Grand Atlas, which was in 1663 the largest atlas ever published by Johannes Blaeu. It was famed for its production values, its high typographic standard, and the quality of its engraving, ornamentation, binding and colouring. The atlas frequently served as the official gift of the Dutch Republic to the princes and other authorities. It is one of the most lavish and highly prized of all seventeenth-century illustrated books. Les Enluminures, Paris will bring a Prayer Book by Albrecht Dürer, Heinrich Aldegrever, Johan Wierix, Crispijn de Passe the Elder, and others. Coming from a private collection in the USA, this previously unpublished Prayer Book constitutes a new addition to the Dürer canon and is an example of a hybrid manuscript with inserted prints and illuminated borders. It contains 14 engravings by Dürer, with contemporary hand-colouring, all from the 'Engraved Passion' executed between 1507 and 1512. Other coloured engravings complete the volume, the unusual text of which may have been specially assembled and written circa 1600 to complement a pre-existing collection of prints.

Rare Antiquities
Charles Ede, London will bring what will probably be the oldest portrait at the fair: an exquisite Egyptian panel portrait of a young woman from the early 2nd century AD. Originating from er-Rubaiyat in the Fayum, south of Cairo, it was excavated in the late 19th century and formed part of the renowned collection of Theodor Graf (1840-1903), it was then acquired in the late 1920s by the Viennese collector Irene Heintschel-Heinegg. These portraits, painted from life, were unique to the Roman period in Egypt, combining the traditions of Egyptian mummification and Greek portraiture. After death the panel was used in the mummification process, to cover the face. These portraits offer invaluable insights into Egyptian society, allowing us to determine not only the contemporary fashions in clothing and jewellery but also ethnicity and physical appearance. Further strengthening the antiquities offering, Rupert Wace, London will exhibit an Egyptian painted wood panel from the sarcophagus of Hathorhotep, 12th Dynasty, c.1890-1800 BC, which is in remarkable condition. This striking piece comes from the collection of Pasha Sayyid Khashaba and is believed to be from the Middle Kingdom cemetery at Meir, Upper Egypt on the West Bank of the Nile. Sayyid Khashaba, a wealthy merchant, was granted the excavation concession to this site by the Egyptian government in 1910. Sometime prior to 1977 the heirs of the Pasha sold it to the Swiss collector, Mr. A Thommen in whose collection it remained until recently.

In the Haute Joaillerie section TEFAF is delighted to welcome Alexandre Reza, Paris for the first time. Alexandre Reza was born in Moscow in 1922 and became one of the most influential gem connoisseurs of the 20th century. Not only did he gather one of the greatest collections of rare gems, he also created true works of art. He became known as the very private jeweller from Place Vendôme to the royals and the rich and famous. They will present La Chose Ring, featuring a natural Colombian 11.72ct. cabochon emerald set on a rose gold and diamond mount.

Antiques
The rarest furniture from all periods can be found at the fair. From a Louis XV commode by Master Maker Adrien Delorme in rosewood, amaranth, tinted wood, gilded bronze and Sarrancolin marble, which came from the Rothschild dynasty on show with Galerie Aveline, Paris, to one of the 20th century’s most sensuous and iconic pieces of furniture: the Mae West Lips sofa designed by Salvador Dali, on the stand of Patrick Derom Gallery, Brussels. Conceived in 1936, the lip sofa relates to Dali's paintings and drawings that were inspired by the Hollywood actress, Mae West. Face of Mae West, for instance, depicts her features as objects in a surrealist room, with her eyes as paintings, her nose as a fireplace and her lips as a sofa. Only five sofas are known to have been made.

Stay tuned as we are travelling to TEFAF Maastricht to fetch all the newest...