London Calling | An Important Swedish Collection in Sotheby's on the 10th 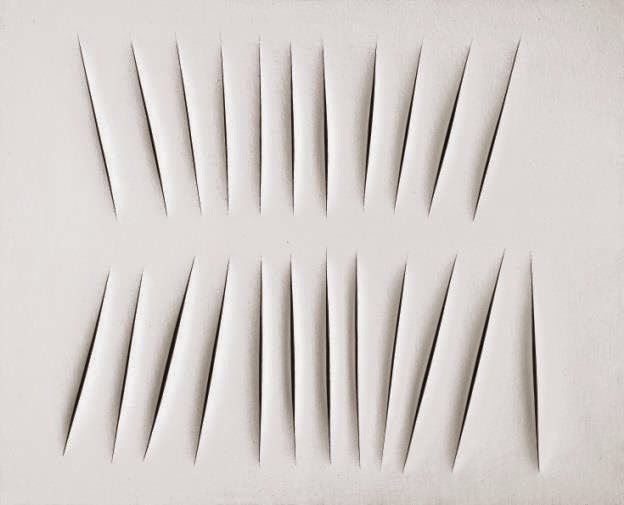 Friday, February 6th, 2015 - Lucio Fontana’s Concetto Spaziale, Attese, a work that has come to define one of the most radical moments in art history - known to scholars, historians and collectors from myriad reproductions yet never before seen in the flesh - is to be offered in Sotheby’s flagship auction of Contemporary Art in London on 10th February. With its 23 immaculate incisions, this celebrated work marks the zenith of Fontana’s creative output. Selected by the artist as the ‘signature’ work through which he chose to record and document – in a series of celebrated photographs - his own radical break with tradition, it holds a pivotal place in the history of 20th-century art. Immortalised in a renowned series of twenty photographs taken by the German photographer Harry Shunk at Fontana’s Milanese studio in 1965, Concetto Spaziale, Attese (est £5-7m) is one of the most famous of the artist’s works. One of only a small handful of paintings with which the artist allowed himself to be photographed, it is by far his most frequently reproduced, Shunk’s series of photographs telling, as they do, the critical story of Fontana’s ground-breaking process. Depicting the artist reaching across a pristine expanse of a pure white canvas with his Stanley knife tentatively raised, Shunk’s photographs document one of the most radical gestures in art history: the moment Fontana exchanged the paintbrush for the razor-blade, heralding the end of the flat picture plane. On 10 February, Concetto Spaziale, Attese will be sold alongside a group of 11 further works from the collection of Anna-Stina Malmborg-Hoglund and Gunnar Hoglund, by Robert Rauschenberg, Jean Tinguely, James Rosenquist, John Chamberlain, Claes Oldenburg, Christo, Arman and Joel Shapiro. A perfect time capsule, the works have barely been exhibited in public since their creation, in some cases for nearly 50 years. Together estimated at £6.8–9.7 million, the 12 artworks were all acquired either through direct links with the artists, or via some of the era’s most renowned galleries; Leo Castelli and Sidney Janis Galleries in New York, Galerie Ileana Sonnabend in Paris; and influential galleries in Stockholm such as Galerie Pierre and Svensk-Franska Konstgalleriet. Anchored to a decade that witnessed a total revolution in fine art practice and museology – the 1960s – this remarkable group pays tribute not only to a sensational era for contemporary art, but also celebrates the far-reaching and far-sighted curatorial accomplishment of the collectors.