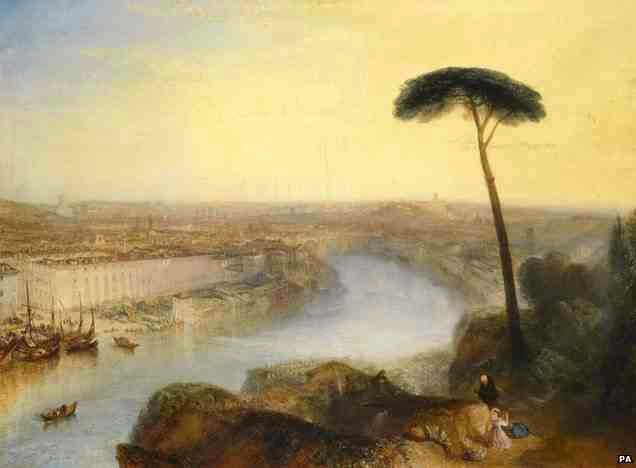 The sale of a Turner masterpiece, one of the last in private hands, has set a world auction record for the artist.  Sotheby's auctioneers said a buyer on the phone paid £30.3m to beat three others to the painting Rome, From Mount Aventine.  Turner exhibited the work at London's Royal Academy in 1836 when he was 61.  The sale price, including a buyer's premium, was also the highest ever paid for a pre-20th Century British artist, a Sotheby's spokeswoman said.  It easily surpassed the estimated price of £15m-20m, and beat the previous record sale for a Turner of £29.7m. Painted in 1835 and exhibited at the Royal Academy in 1836, when Turner was 61 years old, Rome, from Mount Aventine is one of the artist’s supreme achievements and arguably the most important view of the Italian city ever painted. The large-scale oil painting is further distinguished by its exceptional state of preservation, as well as a prestigious and unbroken provenance. Until this evening’s sale, the work had changed hands only once in 1878, when it was acquired by the 5th Earl of Rosebery, later Prime Minister of Great Britain. The painting had since remained undisturbed in the Rosebery collection.