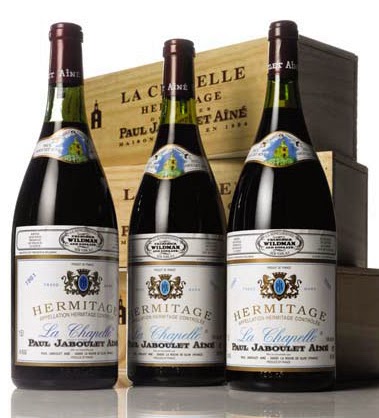 Saturday the 6th of December 2014 - Assuming an overall estimate of  $2.8 to 4 million, Sotheby’s New York will present an extraordinary array of wines drawn from some of the most distinguished private collections in the US as well as offerings direct from producers in both the Rhône and California, tonight in New York. The Magnificent Cellar of Dr. Ed Planz leads off the December 6 sale with an incredible collection of Red and White Burgundy including 1990 Chambertin from Rousseau in magnums, rare verticals of Hermitage La Chapelle direct from Paul Jaboulet Aîné including a 34 bottle vertical of La Chapelle 1961-2012, a rare 18 double magnum vertical of Peter Michael Les Pavots 1994-2011, and the largest offering of Sine Qua Non ever to appear at Sotheby’s including three of the rarest bottlings: 1994 Ace of Spades Syrah, 2000 Heals over Head Syrah, 2002 Heart Chorea Syrah. Read further HERE.