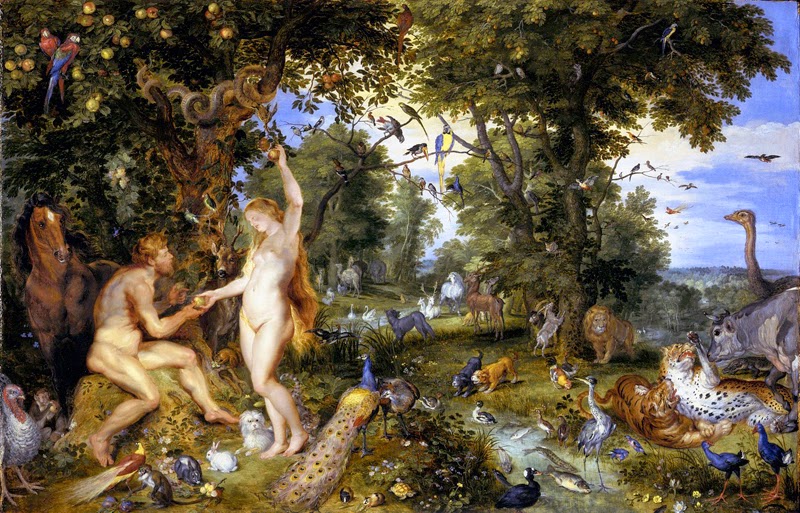 Sunday the 7th of December 2014 - Reading the news two days ago, concerning the temporary export ban placed on an early 17th-century painting, one of the most refined of the paradise landscapes of the Flemish artist Jan Brueghel the Elder, in an attempt to keep it in the UK, I could not avoid thinking that in essence we keep hostage of yet another work of art, a significant world treasure. The Garden of Eden With the Fall of Man (1613) is an oil on copper work measuring just 23.7cm by 36.8cm, set to go overseas after selling at Sotheby’s in London in July for £6.8m, more than double the top estimate. It had been acquired by Algernon Percy, the fourth Duke of Northumberland, in 1853 and had hung in Alnwick Castle but was recently consigned for sale by the present Duke of Northumberland. After the imposition of the ban on its export it is only hoped a Briton will find the £6.9m needed to prevent it going abroad before the ban till this is lifted at midnight on 4 March 2015.

The reasoning justifying the decision was that "experts judged it to be a work of outstanding aesthetic importance"; the artwork is one of the finest examples of Jan Brueghel’s famous 'Paradise' landscapes to remain in private hands. Brueghel’s paradise landscapes such as this typically presented their subject matter within a Biblical context. Because the story of the Creation provides the Biblical link between God and the natural world, Brueghel’s concentration upon the depiction of so many animals was ideally suited to the narratives of the Book of Genesis, in this case, the Fall of Man. Brueghel's landscape depicts the Animal Kingdom in its harmonious state of perfection before the Fall. The viewer is at first drawn to the bewildering array of species, ranging from ostriches, a dromedary, lions and a grey horse on the left, to monkeys, cattle and leopards on the right sides of the foreground, and the eye is drawn in through a variety of birds, including swans, a peacock, heron and duck on either side of a stream into the distance goats and deer roam, and beyond them wander deer and an elephant. All around and above fly a variety of birds, familiar European species mingling with more exotic birds of paradise. And in the distant corner the eye finally alights upon the true subject of the picture, the tiny naked figures of Adam and Eve shown at the moment when they are led by the serpent to partake of the fruit of tree and thus commit the original Sin. The deliberately false insignificance of the key iconographical detail harks back to earlier Mannerist tradition and in particular the work of Jan’s father Pieter Breugel the Elder, but its presence serves to remind the viewer of his primary subject: the natural world as an expression of Divine Creation. These elements were already in place when Brueghel painted his first paradise landscape, the Creation of Adam (Rome, Galleria Doria Pamphilij) in Rome in 1594, when he was in the service of Cardinal Federico Borromeo (1564–1631). His philosophy
provides the religious context within which Jan Brueghel's landscapes of this type would be understood. Nature and its representation in art was to be illustrative of the divine hierarchy, and the magnificence of God perceived through the contemplation of Nature. Borromeo had been particularly influenced by the thought of Filippo Neri (1515–95), the founder of the Oratorian Order, who had stressed the significance of the Creation. For Borromeo the extraordinary variety of all living species was in itself a living reflection of the Divine power of Creation. His posthumous work, I tre libri delle laudi divine (1632) encouraged the worship of God through an appreciation of his creations, and animals in particular.

By the summer of 1596 Brueghel had returned to his native Antwerp, and by the time the present copper was painted in 1613, he had evolved a far more assured formula for the paradise theme, with both landscape and animals altogether more confidently placed in relation to each other, and the mastery of detail in their depiction complete. Works on this theme from the intervening period include a copper in the Prado in Madrid, and a circular copper in the Staatsgalerie, Neuburg an der Donau. The present panel belongs to a core group of pictures painted between 1612 and 1615 in which Brueghel developed his most successful designs for the Paradise landscapes. The most closely related example of this particular composition is the larger copper today in the Galleria Doria Pamphilij in Rome, which is signed and dated 1612. The design is broadly the same as that of the Northumberland copper from the following year, the chief differences being the changing of the positions of Adam and Eve and the greater prominence accorded the horse, dromedary and ostriches on the left of the picture. In addition to these Ertz (see Literature) also records a small (28 x 38 cm.) canvas formerly with William Doyle in New York, which closely follows the present painting, and a larger (60 x 96 cm.) panel last recorded with Goudstikker in Amsterdam, which follows the Doria Pamphilij version. Both are now known only from photographs and their autograph status remains doubtful.4 Two years later, in 1615, Brueghel returned to the theme of the Fall of Man in a copper now in the Royal Collection at Hampton Court, in which the composition is very similar but in reversed format, with the prominent grey horse and the distant figures of Adam and Eve now to be found on the right-hand side of the picture. A close replica in gouache, which Ertz assigns to the hand of Brueghel himself, was with Galerie d'Art Saint Honoré in Paris. The year 1615 seems to have marked the high water mark of Jan Brueghel's preoccupation with this Paradise design, for this marks the date of what is surely his largest and greatest work on this subject, the panel of Paradise landscape with the Fall of Man painted in collaboration with Rubens himself, and today in the Mauritshuis in The Hague.

The route history of the painting is obscure; it turned up into the Northumberland collections with the acquisition by the 4th Duke of the inventory of the gallery of the Camuccini brothers in Rome in 1853. The date of its acquisition or purchase by the Camuccini brothers is not known, but it is not impossible that the painting had been in Rome from an earlier date. Brueghel’s first paradise landscape, that in Galleria Doria Pamphilij in Rome is recorded in the collection of Cardinal Camillo Pamphilij (d. 1666) in 1654 and may well have been painted there for Cardinal Federico Borromeo. The other version of this composition, the larger panel in the same collection, is also recorded in the same inventory. Camillo’s letters, as well as subsequent family inventories, suggest that he acquired most of the paintings by Brueghel in the family collection, including a famous set of the Four Elements, painted around 1610–11 and which remain in the family collection to this day.