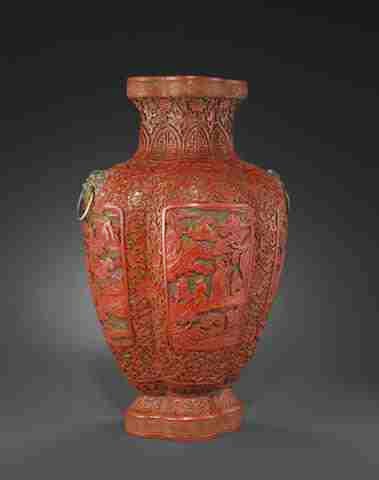 Friday the 5th of December 2014 - Fine jades, bronzes and works of art highlight Bonhams' Fine Chinese Works of Art auction on December 16, as part of a two-day sale of Asian art in San Francisco. Bonhams' biannual auctions of Chinese art have become a magnet drawing international collectors of Chinese art to travel to the West Coast to acquire fresh choice objects from American private collections and estates that Bonhams has historically offered with great success over the last 30 years. The 416 lots of Chinese works of art offered on the first day of this sale should attract collectors interested in all fields to participate in this exciting auction.

A fine white jade covered censer from a Northern California estate (est. $20,000-30,000), purchased from William Clayton of London, by repute, will be one of the many highlights of the more than 150 lots of jades to be offered in this auction. This estate and the collection of Emmanuel Gran will constitute the majority of the lots offered, including white jade toggles and cabinet pieces dating to the 18th and 19th centuries. Choice items from the collection of Harold Stack will also be offered, including a fine and rare yellow hanging vase from the late Qing dynasty (est. $30,000-50,000).

Religious bronzes from the Ming and Qing dynasties and other fine metalwork are a featured attraction of the auction. A fine cast Buddhist bronze deity, 17th century, from the estate of Ralph and Joan Kramer of Sedona, Ariz., (est. $30,000-50,000) and a gilt bronze seated figure of a Buddha, Yongle six character mark (est. $60,000-80,000) from a Southwest collector, are among the many Buddhist bronzes to be sold. Fine enamels formerly in the collection of Sir Harry Garner, noted English author of many books on Chinese art and metalwork and a great early 20th century collector, will be featured highlights of this sale, along with Shang and Zhou bronzes from a Northern California collection.

A rare large three-color lacquer quadrilobed vase from the late 18th/early 19th century (est. $60,000-90,000) is part of a rare group of Chinese lacquer to be sold in this session. Carved with four panels featuring foreigners carrying tribute of auspicious objects, a theme both used to legitimize the authority of the emperor and to enforce Chinese suzerainty over its neighbors for millennia, it carries a conservative pre-sale estimate of $60,000-90,000. A rare carved lacquer box with the "three Gray Beards" seated around a gaming board, reversed by camellias in bloom, late Ming dynasty (est. $40,000-60,000) from a Japanese collection is another highlight of this group. A 12 symbol imperial Chinese dragon robe from the late Qing dynasty (est. $30,000-50,000) is a featured attraction of the fine textiles to be offered in this sale. An elegant huanghuali altar table, 18th century, from the O'Brien collection of Asian art (est. $80,000-120,000), and an 18th century huanghuali cabinet (est. $30,000-50,000) are part of a select group of Chinese furniture to be offered, along with an unusual pair of zitan and burl wood stands from the Republic Period (est. $10,000-15,000).

A fine sancai glazed pottery bowl from the Tang dynasty, formerly in the collection of Mr. and Mrs. F. Brodie Lodge (est. $10,000-15,000), and a group of longquan celadon from the collection of Frank and Georgia James and from a Japanese private collection, are part of a choice group of Chinese ceramics to be offered. Transitional blue and white porcelains, such as a rare blue and white jar, Jiajing mark and period (est. $15,000-25,000) and a doucai glazed prunus and magpie dish, Kangxi mark and period (est. $30,000-50,000), are part of the Qing dynasty porcelains on the block, along with a pair of famille rose and iron red enameled jardinières of the late Qing/Republic period (est. $20,000-30,000) from a Bay Area family collection.

The sale features 60 Chinese classical and modern paintings, including property from the collection of Huang Haonian (1899-1953) and from a San Francisco collection, with works by Zhang Daqian, Deng Fen, Li Kuchan, Pu Ru and Huang Junbi. Two paintings by the famous Philippine artist Fernando Amorsolo (1892-1972) (est. $20,000-30,000 each) from a Canadian private collection conclude the sale.