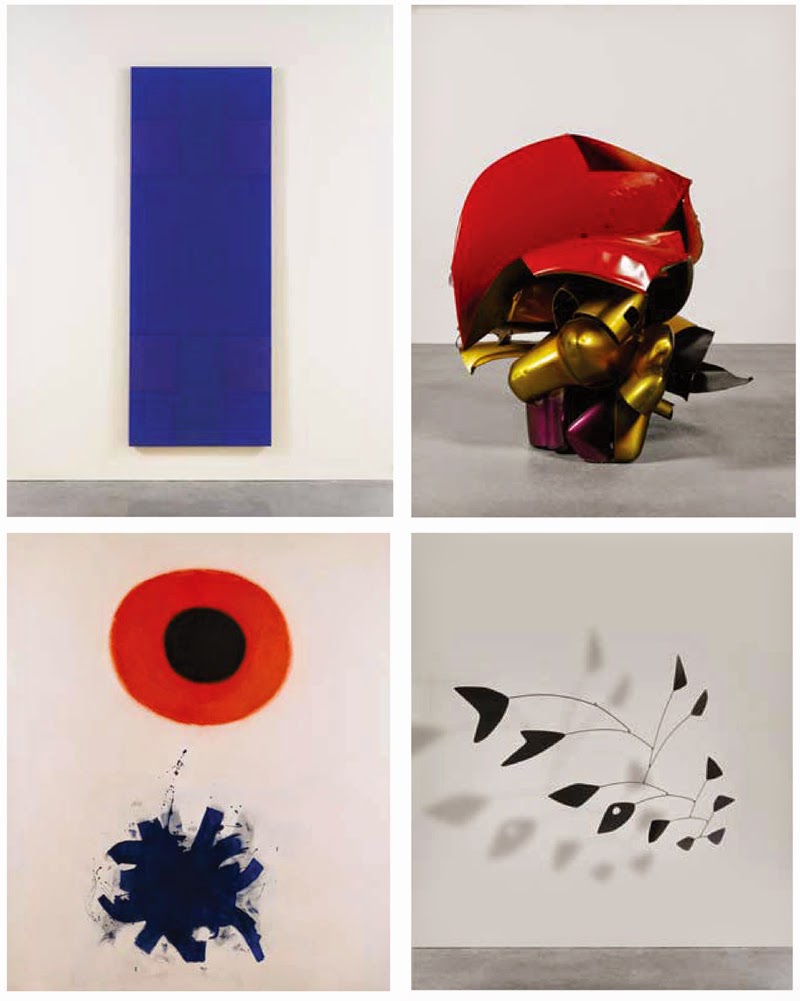 Sunday the 12th of October 2014 - This November, Sotheby’s New York will present The Schlumberger Collection, the magnificent compendium of Modern and Contemporary masterworks acquired by distinguished collectors and benefactors, Pierre and São Schlumberger. The collection brings  together over 90 outstanding works from the Twentieth Century with a combined estimate in excess of $85 million and is led by Mark Rothko’s pivotal canvas No. 21 (Red, Brown, Black and Orange) from 1951, which has been in The Schlumberger Collection for over 40 years. Other highlights include important Color Field, Abstract Expressionist, Pop, and Surrealist works, reflecting a lifetime of collecting fueled by a singular vision and relationships with artists forged over decades. Highlights will be on view in Hong Kong and London before the entire collection will be installed together in Sotheby’s New York headquarters for a special two-day preview exhibition from 22-24 October before being showcased in our main exhibitions of Impressionist & Modern and Contemporary Αrt from 31 October to 11 November. The Collection will be offered in the Evening and Day Sales of Impressionist & Modern Art and Contemporary Art on 4 & 5 and 11 & 12 November, respectively.


Pierre & São Schlumberger are considered two of the most visionary collectors of the Twentieth Century. A successful businessman from one of France’s most distinguished families, Pierre led the company founded by his father, Marcel, and uncle, Conrad, inventors of wireline logging, which is still the primary method used to locate and retrieve oil deposits from the earth’s subsurface all over the world. Pierre Schlumberger had already amassed a superlative collection of Modern art, inspired in part by his uncle, including works by Pierre Bonnard, Henri Matisse and Piet Mondrian, paralleling that of his cousin Dominique de Menil by the time he married São in 1961. Working closely with influential Post-War art dealers Alexander Iolas and Ileana Sonnabend, and nurturing close relationships with artists, São expanded the collection to include contemporary works by a range of artists including Mark Rothko, Ad Reinhardt, Andy Warhol, and Robert Rauschenberg, whose sculpture Oracle is now in the Pompidou Center collection. As leading figures in Parisian and New York society, the Schlumbergers were major benefactors of the arts, helping to fund the restoration of Versailles, backing Robert Wilson’s early avant-garde operas and becoming the first patrons to commission Warhol for a silkscreen portrait. They sat on the boards of the Pompidou Center, where they donated works by Ellsworth Kelly and Frank Stella, and were patrons of The Museum of Modern Art, New York, Lincoln Center and The Museum of Fine Arts, Houston to which they donated a major Piet Mondrian grid painting. Their close circle also included some of the most prominent collectors of the day, including La duchesse de Bedford, Gunter Sachs, Gianni Agnelli, and, Ronald and Leonard Lauder. The couple’s many residences expressed their distinctive tastes in art and design. The renowned architect of his time, Pierre Barbe, architect of the House in Chantilly for the Aga Khan, was a close friend of Pierre Schlumberger. Barbe was commissioned to rebuild the mansion on the Rue Férou near the Luxembourg Gardens which was decorated by Valerian Rybar and Daiere in an audacious and colorful blend of contemporary and classic styles. The home became a salon for artists such as Rauschenberg, Christo, Man Ray, Dalí, and Lichtenstein. The Schlumbergers’ other residences included a 100-acre estate in Portugal, where the couple once entertained 1,500 guests at the famous “Le Dolce Vita” ball, including Audrey Hepburn and Gina Lollobrigida; the David Hicksdesigned Cap Ferrat estate, “Le Clos Fiorentina,” one of the French Rivera’s most beautiful villas; and a stunning Sutton Place apartment in New York. Wherever they were, Pierre and São were an irresistible magnet for a cadre of artists, designers, performers and society luminaries.

Highlights
No. 21 (Red, Brown, Black and Orange) stands at the pinnacle of Mark Rothko’s mature work and is being offered at auction for the first time having been purchased by the Schlumbergers from the artist's estate. The vast canvas was executed in 1951, a pioneering period for the artist when he was exploring the very limits of abstraction. The canvas was first exhibited in the legendary exhibition 15 Americans at the Museum of Modern Art, New York in 1952. That seminal show included many of the most recognizable icons of American Art including Jackson Pollock’s Autumn Rhythm (Number 30) now in the collection of the Metropolitan Museum of Art and Clyfford Still’s 1947-S, in the collection of the San Francisco Museum of Modern Art. Subsequent to that show, the work has only been exhibited twice and has not been seen in public since the major European travelling retrospective of Rothko’s art organized by the Kunsthaus Zürich in 1971-72. Mr. Barker added, “Among the finest examples of the artist’s work remaining in private hands, No. 21 (Red, Brown, Black and Orange), could easily achieve a price in excess of $50 million.” Abstract Painting, Blue is a historically monumental example of Ad Reinhardt’s groundbreaking oeuvre (est. $5/7 million). Painted in 1953, the watershed year in which the artist won the widespread critical praise of which he was so deserved, the work is an archetype of Reinhardt’s pioneering early output and among the largest canvases by the artist to appear at auction. “Major works by Reinhardt are extremely scarce on the market and the appearance of the present canvas at auction this November is a major event,” noted Mr. Barker. The vast Red and Blue by Adolph Gottlieb is a prime example of the artist’s most accomplished renowned series of Burst paintings (est. $2/3 million). The archetypal abstract expressionist gesture of the Bursts is parallel to Jackson Pollock’s “drips”, Barnett Newman’s “zips” and Mark Rothko’s floating bands of color, and Red and Blue epitomizes the triumph of Gottlieb’s most significant series. The monumental eight-and-a-half by twelve-foot canvas of Morris Louis’ Lambda II encompasses the viewer with nearly symmetrical cascades of color (est. $1/1.5 million). The work is one of the first of a series of paintings the artist titled Unfurleds, executed primarily between June and July of 1960, they are widely considered the painter’s crowning achievement. Handshake and Fishtail is archetypal of Alexander Calder’s most forcefully magnetic mobile sculptures (est. $2/3 million, below left). Once in the prominent collection of famed Academy-Award winning director Billy Wilder, celebrated for classic films like The Apartment and Some Like It Hot, the present work’s illustrious provenance renders it a formidable model of Calder’s output during his most sought after period. John Chamberlain’s pressed metal sculptures are some of the most distinctive works post-war sculpture. Mr. Moto from 1963 combines this gestural vigor with many of the aesthetic tenets of the burgeoning Pop Art movement (est. $1.8/2.5 million, above right). Included in many of Chamberlain’s seminal career-defining exhibitions, this work was selected personally by Chamberlain for his retrospectives at the Solomon R. Guggenheim Museum in New York in both 1972 and 2012, Mr. Moto is one of Chamberlain’s earliest and foremost sculptural achievements.
Email ThisBlogThis!Share to TwitterShare to FacebookShare to Pinterest
Labels: Auctions, ENGLISH, Τέχνη
Newer Post Older Post Home