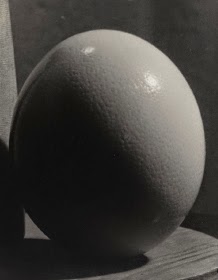 At the core of the sale is a group of over 191 lots of vintage photographs ranging from portraiture and fashion photography, including solarisation and gauze effects, to Surrealist compositions and iconic Man Ray photographs such as Magnolia Flower (1926), Starfish (1928), Ostrich Egg (1944) and Mathematical Object (1934). Renowned for his superb photographic portraits of the key artists, composers and writers of 1920’s and 1930’s Paris, the auction offers portraits of Pablo Picasso, Georges Braque, Juan Gris, Jean Cocteau, Francis Picabia, André Derain, Alberto Giacometti, Joan Miró, Erik Satie,
Paul Eluard, Henry Miller in addition to a rich offering of selfportraits, many previously unpublished. A significant number of these portraits were featured in last year’s exhibition Man Ray Portraits, held at the National Portrait Gallery in London. The sale also includes portraits of his muses: Kiki de Montparnasse, Lee Miller, Ady Fidelin and many of his wife Juliet (photographs, drawings and a painting). Also featured are portraits of stars of stage and screen, including: Ava Garner, Paulette Goddard, Leslie Caron, Juliette Gréco, Yves Montand and Catherine Deneuve. Among the paintings to be sold is an arresting portrait of Juliet, Purple Mask (1948) and Much Ado about Nothing (1949), from Man Ray’s series of Shakespearean Equations. A number of intriguing Surrealist objects are being offered, including Man Ray’s legendary irrational and humorous object Ce que manque à nous tous, comprising a clay pipe with a glass bubble. Also included are a number of items of Jewellery including a gold broach of the lips of Lee Miller, inspired by the artist’s celebrated painting Observatory Time (A l’heure de l’observatoire – les amoureux) (1932-34) and Man Ray’s earrings in the form of unravelled lampshades, identical to those worn by Catherine Deneuve in Man Ray’s photograph for the cover page of The Observer Magazine (1975), a variant of this photograph of which is also included in the sale. The game of Chess provided tremendous inspiration to the artist throughout his career, and the sale includes two chess sets, a large scale Chess Painting and numerous photographs of his chess sets and designs. The Man Ray Trust The Man Ray Trust was formed by Juliet Man Ray (1911-1991), widow of the artist, for her benefit and later for her heirs and their descendants. The Trust’s collection of works by Man Ray comes directly from the Estate of the artist. Upon the demise of Juliet Man Ray, a significant number of works by Man Ray, including the artist’s photographic archives, were donated to the French Government in lieu of taxes (Dation). This important collection is now housed at the Centre Georges Pompidou in Paris.