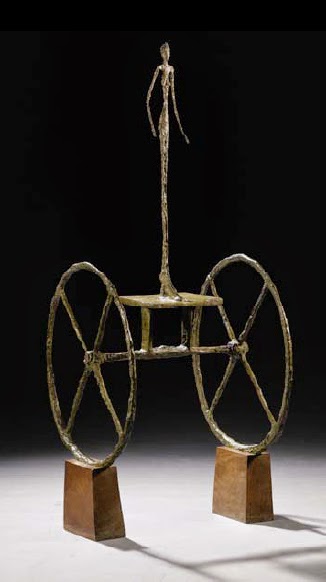 Wednesday, October the 8th 2014 - Sotheby’s will present a unique, painted cast of Alberto Giacometti’s legendary Chariot – the masterwork of the artist’s career, and one of the seminal achievements of modern art. The bronze, which depicts a goddess frozen in motion on her largewheeled chariot, is celebrated both as an icon of Existentialism and a beacon of hope for the Post-War generation. Conceived in 1950 and cast in 1951-52, the present example is set apart by its gold patina and exquisitely-painted surface. It  is one of only two casts remaining in private hands – the sole painted cast still owned privately – and has been in the same distinguished private collection for more than four decades. It will be the first Chariot to appear at auction in over 30 years when it leads Sotheby’s Impressionist & Modern Art Evening Sale in New York on 4 November 2014.

Chariot’s origins lie in Surrealism, a movement that had dominated Giacometti’s work in the 1930s. The sculpture had a profound personal significance, reflecting an epiphany in his creative development, and was inspired partly by the “tinkling pharmacy carts” he witnessed in hospital following his car accident beside the gilded statue of Joan of Arc in Paris. Years later, this memory sparked the composition of Chariot: “In 1947 I saw the sculpture before me as if already done,” Giacometti told his dealer Pierre Matisse, “and in 1950 it was impossible not to realize it, although it was already situated for me in the past.”
The artist also drew inspiration from antiquity, including an Egyptian chariot he had seen at the Archeological Museum in Florence. Six casts of Chariot were made during the artist’s lifetime. In rare cases, Giacometti would enhance the patina of a select bronze by painting directly onto its surface. The present cast is one of only two painted examples – the only painted example owned privately – with detailed facial features, hair and other markings, as well as a burnished gold patina that connects the sculpture with heroes, saints and deities across history. Only two Chariots remain in private collections, with the four other casts owned by: The Museum of Modern Art, New York; the Alberto Giacometti Foundation; the National Gallery of Art, Washington, D.C.; and The Nelson-Atkins Museum, Kansas City. Sotheby’s has achieved multiple landmark prices for works by Alberto Giacometti. In 2010, Sotheby’s established a then-world auction record price for any work of art when it sold L'homme qui marche I for $104.3 million. This remains the world record for any sculpture sold at auction. In 2013, Giacometti’s Grande tête mince (Grande tête de Diego) achieved $50 million at Sotheby’s New York, the top price in any Impressionist & Modern Art auction worldwide that year.

Chariot will be presented alongside further exceptional sculpture in Sotheby’s Evening Sale, including Amedeo Modigliani’s Tête from 1911-12. The carved stone belongs to a rare series of sculptures created in the likeness of ancient totemic goddesses, and is estimated in excess of $45 million (separate release available). Also on offer are three monumental Surrealist sculptures by Joan Miró from the Irma and Norman Braman Art Foundation. The group is led by Personnage gothique, oiseau éclair, a nearly-15-foot bronze conceived and cast in 1976 (est. $6-9 million).
Email ThisBlogThis!Share to TwitterShare to FacebookShare to Pinterest
Labels: Auctions, ENGLISH, News
Newer Post Older Post Home