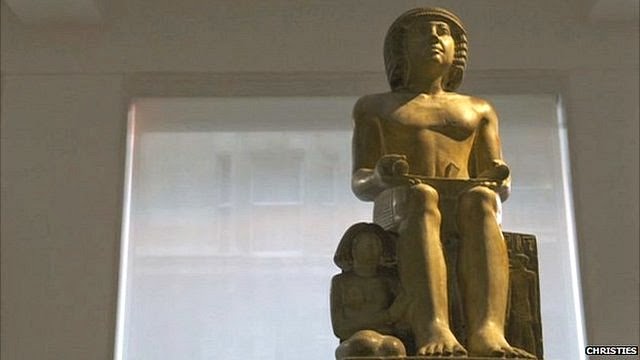 Northampton Museum unleashed hell last week in London, due to their respective decision to sell a 4,400-year old-Egyptian statue for a £14m  bid at auction through Christie's. Conceiving the act as a test to repercussions that will be caused if another resolution for sale will occur by a major British Museum by some, while perceived as a raw blackmail to increase the support to our Museums by others, the movement has certainly made an impression.

The 30-inch-high limestone statue, which represents Sekhemka, described as a royal scribe official, was sold at Christie’s by the town-owned museum located some 70  miles outside of London, to finance an expansion. Despite the initial appraisal for an international buy of $7 million to $11 million a world record at auction for a work of ancient Egyptian art was established.

Now that we have mentioned all the facts we are led to the actual story behind it. The sculpture had been donated to the town in 1880 by the 2d Marquis of Northampton who had purchased it during a trip to Egypt by a local regime in 1850, and kept in storage since 2010.  Significantly many interested parties were unable to prevent the sale on legal grounds, though protests through official and unofficial channels took place, respectively, by the the Egyptian government, British museum officials, residents of Northampton and pressure groups on moral grounds. A  "Save Sekhemka Action Group" was formed. In a statement, Egypt’s ambassador to Britain, Ashraf Elkholy, said: “A museum should not be a store. Sekhemka belongs to Egypt and if Northampton Borough Council does not want it then it must be given back. It's not ethical that it will be sold for profit and also not acceptable. The council should have consulted with the Egyptian government”.  Two London-based groups that accredit English museums opposed the sale and said they would reconsider the Northampton museum’s accreditation. Such accreditation is necessary for museums to seek public funding.  The town said the money would be used to double the size of its museum. Northampton will retain $13.8 million of the sale price and pay about $10.4 to the current Lord Northampton, under the terms of an agreement signed at the time of the 19th century donation. The remaining $2.8 million reflects the buyer’s premium.  Christie’s declined to identify the buyer.

If none of the above scenarios prevail, the Museum's administration may yet subscribe to the dogma that even a negative advert is still an advert; till now the Northampton Museum and Art Gallery is known for its 12,000 pairs of shoes collection, with some pairs that are even dating back to 1000BC. Considering this sale, someone should need the Hermes' winged sandals to get off our decent island...